Changing the Structure After 5 Years?!

It's been so long since I've written on this here lil' blog that I was surprised that my computer even remembered the address when I typed the first three letters. If it hadn't been for those of you vocal and committed readers, letting me know you're out there, sharing your thoughts in response to my past posts, I probably would have had to go through the effort of typing out every last letter.

On a more serious note, I so appreciate reminders that you're out there. In fact, the most recent note I received is likely the reason that I'm here now.
So, thank you!
I've missed you, dear international community.
And I've missed blogging.

But I'm back. Hopefully for a while, but at least for tonight.
Things are brewin' on the bilingual horizon and I couldn't not share.

As much as I'd like to wax on a side note about the strangeness of this whole 'Mami' phase, after being called 'Mama' for 4 years, and most recently 'Mom', I will stick to the point that I was originally wanting to make: after the last 3 years of speaking only German with one another, using the commonly known methodology of OPOL (one parent, one language), it is still the language we use to communicate, albeit for a few words here and there that we both throw in when we don't know the term in German.

That makes me really happy!
Especially when I consider the road we traveled to get here.

AND...it's about to all change.
Tomorrow.

As you may know, if you've been around since the beginning, or been curious enough to explore my posts from back then, I've certainly had my moments where I was ready to give up, and gave it very strong consideration. Granted, I never planned on throwing in the towel completely...it was more a matter of wanting to lighten the 'burden', the stress of not knowing (particular words, phrases, and more challenging, what the outcome would be), the pressure (of feeling like I should know more, speak better, etc), the fear (would we have enough connection, would she suffer somehow?), the doubt (is all this effort 'worth it'?). I thought about all sorts of different arrangements that I might work to ease my stress, including picking certain days, or parts of days, when we might speak some English with each other. I even remember a time, a few Christmases ago, when I thought we might whisper when we wanted to speak English. That seems so funny now.  But I never 'let' myself try any of those alternatives. As much as I was very committed to her proficiency in German, I was also very afraid of what might happen if I did let up. And, underneath that, what that might mean about me if I did?

Apparently, the intense personal development and coaching training has paid off, for I'm no longer stopped by my fear in this arena (and how great that feels!)...:

As I was lying in bed with her, noticing how many English words she was infusing into her story from her day at school today, I asked her if she liked speaking German with me. "Jaaah," [yeeaah...] she said, wriggling with her whole body and burying her face in her pillow. As our conversation progressed, it became clear to me that she does like speaking German with me, and doesn't want to lose it, but is curious about and interested in speaking English with me, as well.

Me, too.
There has definitely been a part of me, since the beginning actually, that has wanted to have at least part of my relationship with my daughter in my native language--the reason that many, if not most?, bi- or multilingual parents choose the language they do with their children.
I'm no exception.

"Ich habe eine gute Idee," [I have a good idea] Kaya proclaimed, as we continued our discussion, snuggling close in the darkness of her room. "Wir koennten ein Jahr English sprechen, und dann ein Jahr Deutsch." [We could speak for one year in English, and one year in German.] I wasn't sure if she really meant 'year', or if she was going for another time frame--she is still learning the concept of time, and often gets the concepts confused, if not just the words (the bilingual thing definitely confuses the issue). After clarifying with her that she knew what a year really felt like (from the beginning of one school year, to the end, plus a whole summer), she verified that she really did mean 'year', and proceeded to explain to me why she thought this was a good idea. Granted, her reasoning wasn't much more than an explanation of what we'd do, but it was clearly her argument. One year English, then the next in German. Simple as that.

As much as I'm into the idea of exploring options at this point, especially with my fluent 5 year old, I'm not into losing the language, which, I shared with her, is likely what would happen if we took an entire year off from the language. While not initially convinced, she ultimately heard me, enough to listen to my 'counter-proposal': "Wir koennten an einem Tag der Woche Englisch sprechen," [We could speak English one day a week] not quite confident about my idea, but happier with it than the idea of losing our German. She clearly didn't like that idea. "Was?!" [What?!] was her quick rebuttal. "Nur ein Tag?!" [Only one day?] As we lay there, ruminating on this idea that neither of us was so fond of, Kaya chimes in again. "Ich habe eine gute Idee! Wir koennten ein Tag Deutsch und dann ein Tag Englisch" [I have a good idea! We could do one day German, and then one day English.]

What you gotta understand about this idea is how representative it is of how often this happens. Generally, we think of ourselves, as adults, as knowing more than kids, right? I mean, in my case, I've been on this planet for 35 years longer than my daughter, you'd think that I'd know more, and have more (and more unique?) ideas than my five year old. Well, apparently, bilingualism (or maybe it's just childhood?!) trumps my level of confidence, because it happens quite regularly that didn't even cross my mind--even on those topics, like this one, where I've been mulling for 3 years!
Kaya will come up with an idea that

Ingenious. One day on, one day off. The idea might exist in certain parenting books, but not any of the many that I read in her upbringing.

As I mulled this idea over in my head, as much as I loved it, I also noticed myself feeling a bit hesitant about what it might mean for her (our?!) German. She's already mixing quite a bit, particularly on days like today where she spent the last 40 hours in an English-speaking environment. So, I proposed an amendment: "Ich habe eine Idee! Wie waere es, wenn wir an den deutschen Tagen Deutsch sprachen, und an den Englischen Tagen, Englisch mit Deutsch wenn wir wollten?" [I have an idea! What about if we spoke German on the German days, and English on the English days with the option of speaking German if we wanted?]

Nein.
Her antipathy was clear. That idea was not going to fly.

And with that, she responded calmly, "Ich habe eine Idee! Wie waere es, wenn wir an den deutschen Tagen Deutsch sprachen, und an den Englischen Tagen, Englisch?!" [What about if we spoke German on the German days, and English on the English days?] I know it may not seem so funny on the screen, and it didn't seem funny to her either ("Mama, das ist nicht lustig..." [Mama, that's not funny...she said, laughing along with me], but I found it hilarious that she would propose that, as if so sarcastically to make her point.

So, that's what we're doing.
After 3 years of one method, 5 years of only ever speaking to my daughter in German (with a few explosive exceptions here and there), the structure is about to change. Yes, I'm a bit concerned, as I shared with her, a bit fearful that it might be a slippery slope and we'll never 'get it back' to this point ("Warum hast du Angst, Mama? Es ist nur...um...sprechen mit Deutsch...?" [Why are you afraid, Mama? It's only...um...speaking with German...]). And she, too, has her fears, as she shared with me just before I left her room: "Mama, ich habe Angst, dass wir morgen anfangen..." [Mama, I'm scared about starting tomorrow...]

But despite our minimal fears and concerns, we are both excited!
It's wonderful to be in a place, as George Saunders shares in his book, Bilingual Children: From Birth to Teens, where I can discuss with my daughter what she wants to do. Granted, I'm still older, with more experience on language proficiency, and what it takes to maintain fluency. But, as I highlighted above, she's clearly got me trumped on some other facets of her idea propagation.

I LOVE reading your comments, they make such a difference! Thanks for sharing! 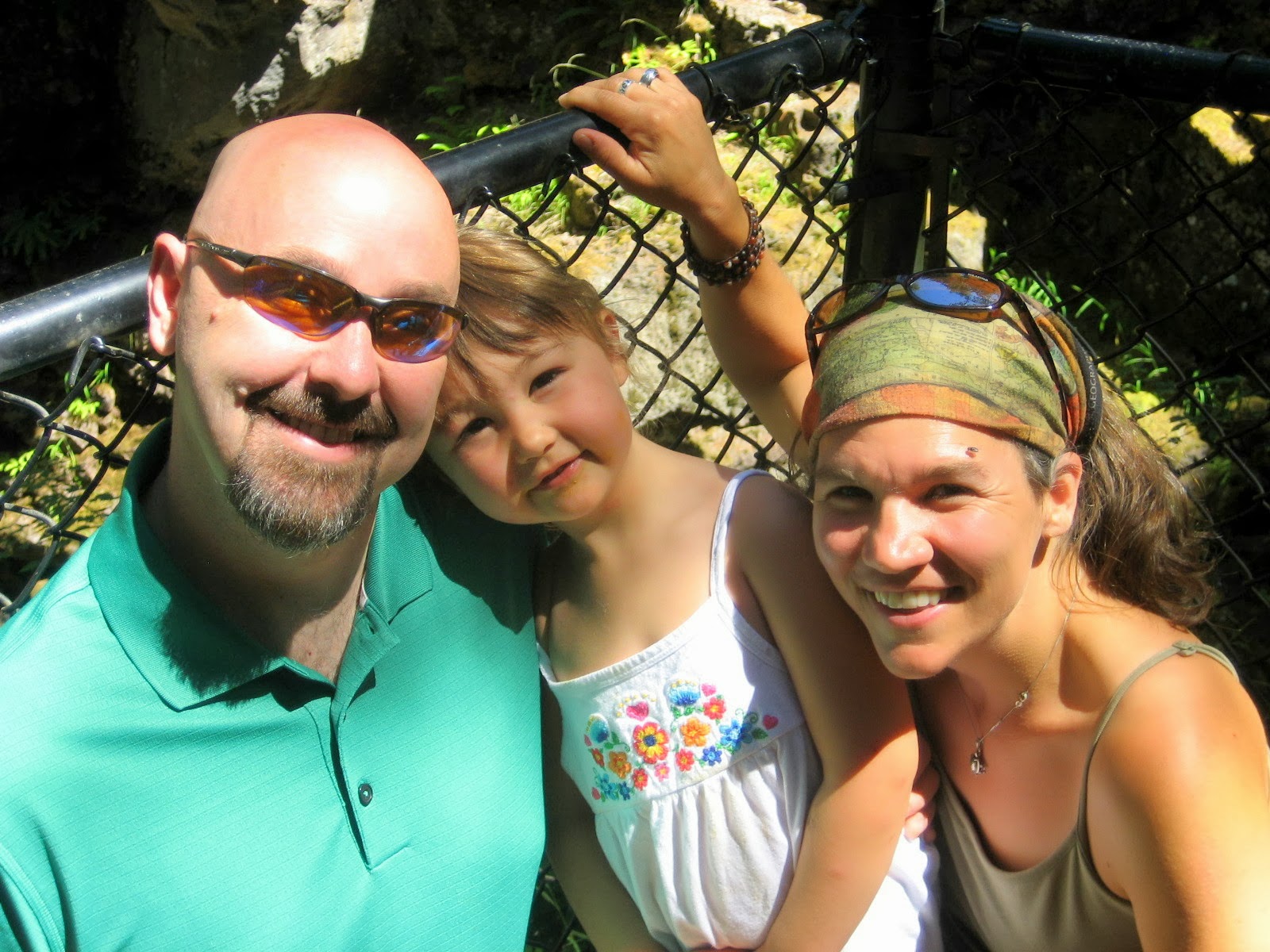 Geoff, Kaya and Tamara, July 2013, Enroute to Crater Lake
Welcome to Non-native Bilingualism, my blog dedicated to processing my thoughts and discoveries in raising our daughter bilingually. We are a family of three, living in the Pacific Northwest raising our daughter in both English and German. Both my husband, Geoff, and I were raised speaking English in the United States. Geoff speaks English with Kaya while I speak German with her. With each other, we speak English.

After studying German and Spanish, spending a few years in Germany, and multiple years teaching both languages, I was passionate about the idea of speaking only German with Kaya as a way of teaching her another language. That's what I have done since moment one, and despite the challenges and moments of doubt, have no regrets thus far. I've certainly had my fair share of doubts about being a non-native speaker of German, which is part of my motivation to start this blog. I know how much I benefit from writing about my process, particularly of my doubts. I also benefit immensely from reading and learning about others in my same non-native shoes, and thought I could provide another resource for those interested.

In addition to my personal thoughts on raising our daughter bilingually, I have made this a place where you can find a variety of links on bi and multilingualism, as well as resource recommendations for both general and more specific bilingual endeavors.

If for no other reason, I write this blog for my daughter, Kaya, so that I will have continued motivation to give her the gift of multilingualism.

I'm glad you found us here, and I hope that you will feel comfortable in sharing and adding your input to anything that may inspire you here or elsewhere!

Committed to the Climate? Concerned?

It can be really challenging, as a non-native speaker, to learn a whole new set of nursery rhymes and songs to sing to your child. As another blogger reminded me, it's super helpful to find those rhyme and song equivalents with tunes already programmed in our brains. Thus, I've created a Google Document with a growing list of nursery rhyme and song equivalents between German and English. I've set it up so that ANYONE can edit it, so please add a song or two or three if you know any crossover songs that we can share as a community! Thanks!

German Children's Resources on the Web